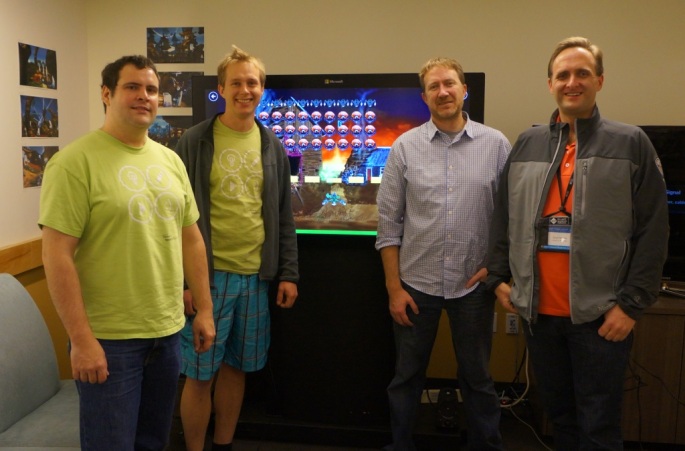 It’s been a while since I last updated my blog; I’ve just been so busy that I’ve hardly had a chance. Last time I wrote I was about to head down to Birmingham for the NEC Skills Show to demonstrate the incredible Project Spark, so I thought that would be a good place to start.

I spent two days at the Skills Show at Birmingham NEC, at the invitation of Lee Stott (Microsoft Technical Evangelist), presenting on Microsoft’s amazing new game creation tool Project Spark and on Microsoft’s cross-platform app development tool TouchDevelop. Microsoft sponsored the City and Guilds stand at the Skills Show, which was an amazing event which had at least 75,000 visitors over the 3 days of the conference.

I also got to meet up with another one of Microsoft’s Innovative Expert Educators, Simon Johnson Highfields School – Secondary Comprehensive (11-18) in the City of Wolverhampton.a High School Computing teacher from Highfields School in Wolverhampton. I had been corresponding on Twitter with Simon for months about TouchDevelop, as he was using some of my TouchDevelop game creation tutorials with his pupils. Simon has set up a TouchDevelop challenge website with some great resources on it and fascinating examples of games created by his pupils.

Simon concentrated on TouchDevelop at the Skills Show, while Simon Michael (Microsoft Technical Evangelist) and I concentrated on spreading the word about Project Spark to the legions of High School pupils passing by. The reception for Project Spark was incredible; I really think the creative types who love Minecraft will love it. Project Spark has the creative aspects of games like Minecraft and game engines like UDK, but unlike Minecraft you can change the way the world works and program the characters to do what you want, including programming NPC (non-playable characters) with AI. Spark was created by the same minds behind Kodu and it builds on the simplistic language of KODU, so those who are familiar with coding in Kodu will take right to it, however there is so much more you can do in Spark than you could in Kodu. In Project Spark you can create a rich beautiful 3D world with its amazing next generation graphics, far superior in my opinion to the blocky world of Minecraft, but for those who love their Minecraft blocks there is even a cubify option. Project Spark has been added to the Kodu Kup competition this year and it will be launching free soon on Windows8.1, Xbox One and Xbox 360.

I had a great 2 days at the show, showing off Project Spark to the multitudes and even saw a few famous faces, like Theo Paphitis of Dragons Den fame and Princess Anne, who came by our stand for a visit, but unfortunately did not try her hand at Project Spark. I also got to demonstrate and do a recording of my Kinect Math Mage game, being played by Dolly bow bow. What you have never heard of her? Neither had I, she is YouTube famous evidently :-).

Straight after my 2 day stint at the Skills Show, I jumped on a plane to Seattle from London for my first visit to Microsoft HQ in Bellevue, which is just outside of Seattle on the North West coast of the USA. I was visiting for the Global MVP summit, as I have recently been awarded the title of Microsoft Most Valuable Professional for Kinect, making me the only Kinect MVP in the UK. The MVP programme has around 4000 professionals in it from over 90 countries and they answer more than 10 million questions a year to the technical community.

I got to Seattle on Saturday and the conference was beginning Sunday evening, so I spent Sunday during the day doing a bit of sightseeing, my favourite thing was having brunch at the top of the Space Needle.

I spent the first 2 days learning about the new Kinect for Windows version 2 which will be coming out probably around summer 2014. It is based on the Xbox One Kinect and has many new features over the old Kinect for Windows, such as:

While I was at the conference all Kinect MVPs in attendance (about 12 of us) were gifted an alpha version of the new Kinect for Windows (K4W) v2 developers kit. It really is an amazing piece of kit and the accuracy of skeletal tracking is far superior to the previous generation.

All MVPs attending the summit also received $300 off a Surface 2, making it a bargain at only $150, plus they gave us a free keyboard cover as well. I really love my Surface 2 and my iPad mini has almost been retired. There are still some Apps missing that I would love on Surface, but when I want to do some serious work on the go, or I want to take my work with me without having to carry about my full size laptop, there is no comparison and Surface wins. Plus it has a USB3 port, which might seem like a minor thing, but it really is a God send on a tablet when you have been used to not having one on the iPad.

On the morning of day 3 I got a message from Peli early in the morning, asking if I wanted to go to a School with him, so I quickly got ready and took a taxi out to the school for 8.30am. Peli goes to the School 3 or 4 times a week from 8am until around 9.30am and then goes into Microsoft to do a full day’s work, that’s commitment for you. I gave a talk to the class about games development and TouchDevelop and showed them some techniques I use with TD to make games with my students back in Scotland. It was fascinating to see a full class working on TouchDevelop just using phones or tablets to program on. In college we mainly run it on a pc and load it up on a phone or tablet for testing, but these students were doing it all on the phone. It was also strange and flattering to hear that students from half-way around the world were making games using my games curriculum.

Later that day I recorded a video for Microsoft where I was interviewed about my use of Kinect and they also recorded me demonstrating my Kinect Games. That evening I had a great night out at the MVP attendee party at the Seattle Aquarium and Seattle Great Wheel, at which I beat Ben Lower at Kinect Golf and enjoyed a ride on the Seattle Great Wheel, which is a slightly smaller version of the London Eye.

On the last day of the summit I visited Microsoft’s amazing Envisioning Center with the rest of the Kinect MVPs and I got a glimpse into the future of technology, which evidently involves a lot of talking to appliances and rooms which sense your presence and sets the environment to suit you. I also got to go to the games studio that is behind Project Spark and meet with Scott Fintel who is project lead on both Kodu and Project Spark. I got to see the team hard at work on Spark and see the amazing concept art behind Spark. Peli & Nikolai from the TouchDevelop team came over later on and we jointly recorded a video with Scott, about Kodu and Project Spark for the Hour of Code on Channel9.

The MVP summit was truly an amazing experience and I got to meet some incredible people from Microsoft as well as some inspirational MVPs who are doing amazing things with Kinect and other technologies. I just hope they renew my MVP award next year so I can attend again.

The last (but not least) part of this blog post is about my visit to Cardiff in Wales to meet up with the other Innovative Expert Educators who will be attending the Global educational forum in Barcelona with me. Strangely enough Wales is the only country in my travels with Microsoft to which I had never been before. It was great to meet up with friends like Gareth, Ray, Stuart & Simon, but also to meet the likes of Katie, David Rogers & Scott for the first time. Gareth Ritter became our tour guide for the weekend and took us in his School mini bus around Cardiff finding various places to eat and drink that only Gareth would know about.

When we got down to work on the Saturday, Stuart Ball laid out his plans for us for the coming year as MS Innovative Expert Educators and discussed our areas of expertise and what we are going to focus on. He also helped us get our heads around what we need to do for Barcelona in March. Overall it was a great weekend with some old friends and some new ones and Wales is not that bad after all, but Cardiff Airport is tiny, what gives with that?

Thanks again to the Partners in Learning Network and in particular the UK programme manager for PIL Stuart Ball, for supporting us Innovative educators and for putting me on this path. Also a shout out to Lee Stott Technical Evangelistic at MS for inviting me to speak at so many events and for the great support he has given the Games Dev courses at West College Scotland over the past few years. My next post about my travels with Microsoft will be on the Global Education forum in Barcelona in March, at which 250 of the most innovative and inspiring educators from around the globe will be in attendance. Watch this space!