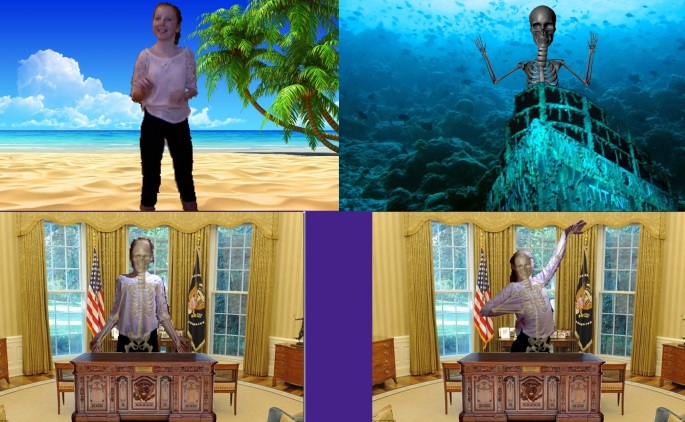 This update has been coming for a long time and was actually pretty much complete before the summer, but I’ve been so busy with my new role at College that I haven’t had a second to package it up and get it out. The new version of my Kinect educational games makes use of the latest Kinect SDK (v1.8) for the original Kinect for Windows, using the new SDK brings some performance boasts in itself. However the main thing that this release adds is the new X-Ray mode in my NoNeed4Green program (the green screen without a green screen). Press X once to show a skeleton overlaid on whoever is standing in front of Kinect, press it again to show just a skeleton avatar. I’m sure all you innovative educators out there can think of uses for this in the classroom.

Download the new version of Kinect Games from here. It requires Windows 7 or Windows 8 and a Kinect for Windows v1 or Kinect for XBOX360 with external power supply.

Thanks goes out to Benjamin Swindells (an ex-student of mine) for providing the skeleton graphics captured from his 3D models. Benjamin is one of the best 3D modellers/animators I have had to privilege to teach, far better than me at 3D art. Also thanks to my fellow MS expert educator Simon Johnson for creating transparent versions of the skeleton for the overlay mode.

First off respect to all London workers who do the tube thing every day, it’s a very quick and efficient way of getting about London, but I couldn’t handle the rush and crush every day. I saw one women getting the door slammed shut on her and another few close calls, plus I experienced being crushed hard against the other commuters on the tube on the way home from BETT one evening, something I’ve not experienced since I was in Manchester to watch Rangers in the UEFA cup final a few years back. So respect to those who do that every day.

Before Christmas I took part in 3 virtual university sessions on TouchDevelop with Peli de Halleux from Microsoft Research in USA and was selected from the 50 or so educators from around Europe who took part, to go to London for a final 24 hour appathon.  TouchDevelop is an exciting new platform which allows you to create apps on any HTML5 enabled browser and therefore you can develop on pretty much any platform, including mobile devices such as tablets or even phones. The apps you create can also be tested in the browser, so this platform provides the opportunity for students to create apps on mobile devices for mobile devices and on pretty much any device they have and see it running on that device. The final apps can be published as Windows 8 RT apps or Win7/8 phone apps on the Windows marketplace.

I flew down to London (courtesy of Microsoft) on the Sunday night before the event and due to Easyjet delays ended up getting to the hotel just before midnight. We began the event on Monday in Microsoft’s plush London offices and it was exciting to meet up with the other educators from around Europe who were taking part. Along with my English friends Jimmy Edwards and Ray Chambers who I knew from Microsoft Partners in Learning, I especially enjoyed talking to and sharing ideas with the 2 guys from Norway who are doing amazing stuff with Minecraft in the classroom. The appathon kicked off properly at 11am and we went hard at it, developing our app ideas into reality using TouchDevelop way into the small hours. I was creating a Windows Phone app version of my Kinect Math Mage game which I had just finished developing the previous week.

The competition went on late into the wee hours and I was last to leave at around 4am, but on the walk back to the hotel it dawned on me that I had a bug in the game and did a bit more in the hotel and finally went to bed around 5am. Luckily we didn’t need to be back to present our apps until 1pm.

We gathered together at 1pm and presented our apps to the judging panel and to our fellow educators. Math Mage was one of the fully completed apps, which made me feel pretty good about it, but there was some very stiff competition from Eastern Europe and from my friend Ray Chambers.

I must give a shout out here to Michael Philp a Scottish art student who created the amazing original art work for Math Mage, in my view anyway Math Mage was certainly the best looking app :-).

At the dinner later that night, the Ukraine pulled off the win for an amazing app which lets you construct and test electric circuits on your mobile phone. The winner received a brand new Surface RT Tablet courtesy of Microsoft. Despite not winning the big prize Microsoft UK were very impressed with the apps that myself and Ray Chambers produced and are going to publish them both in the Windows Marketplace.

On Wednesday I went to the BETT Show at the ExCeL Convention Centre where Vince Cable and Microsoft VP Anthony Salcito opened the show in the new Microsoft Arena in the middle of the massive ExCel conference centre. I bumped into Ollie Bray on the tube on the way to BETT and had a good chat with him and he shared some ideas for things I could do with Kinect, as well as catching me up on the exciting things he is involved with at present.

I enjoyed exploring the show on Wednesday and met up with the Northern Irish team from GameToLearn who I had done a Skype interview for last year, but never met in person. I recorded a new interview for them at the show and tried to be more positive this time when they asked for one word to sum up education (last time when they sprang it on me and I said “Challenging”). I also saw a company from Greece who are producing some nice educational Kinect games, not a million miles away from the Kinect Games I have created, but who are charging for their games (better grab my games for free while you can). Their system does have a whole backend reporting system to give feedback on how the students are performing which is a nice touch, but my games make better use of Kinect’s camera to give a more augmented reality aspect to my games. I couldn’t see an overall theme running through the show, but if I had to choose one I would say BYOD was the dominant message, which is Bring Your Own Device and the idea that in future students of all ages from Primary through to FE and HE should be allowed to take the amazing technology sitting in their bags out and use it in the classroom.
On Thursday Ray Chambers was back in town and after a morning of footering with our PowerPoint we headed to BETT to present on Kodu, Kinect, xGames and TouchDevelop. Before we presented we went to the NAACE stand for the launch of the Kodu Kup in conjunction with Microsoft. I bumped into Microsoft VP Anthony Salcito at the stand and had a chat with him about my Kinect Games and showed him pictures of how they were being used in Schools on my iPad mini (never have I wished for a surface tablet more). However he wasn’t totally put off as he came along to our K-Team presentation later on. On the NAACE stand Stuart Ball from Microsoft Partners in Learning along with Nicki Maddams from the K-Team launched the exciting new competition for all school kids aged 7 to 14, where they are challenged to work together in teams of 3 to produce a game which will be judged by Microsoft, with the top ten teams from around the country winning a trip to Microsoft HQ in July, where the top teams will be rewarded with XBOX360s and Kinects.
After that myself and Ray rushed over to Learn Live D where we were presenting as the K-Team on Kodu, Kinect, xGames and TouchDevelop and how these tools can and are being used to the classroom to engage and excite learners. We had some famous faces in the audience such as Anthony Salcito and Stuart Ball from Microsoft and the game developers behind the Fable game series. The presentation went very well and it seemed to be well received by everybody.
On the Friday myself and Ray had initally planned to take it easy and just take in the show and I had planned to go see Professor Brian Cox presenting, but Lee Stott from Microsoft managed to glently persuade myself and Ray to take part in another Appathon, this time it was the Stone Hackathon which was being judged by Johnny Ball of 80s kids tv fame. Ray made a french and maths version of his Spelling Bee app and I made an English version of my Math Mage called Word Mage which tests kids knowledge of Nouns, Verbs, Adverbs and Adjectives. Congratulations to Ray as he managed to grab second place for his Spelling Bee App and won a small portable printer for his efforts. It was another day spent on touchdevelop and it is a platform that I am getting very familar with in a short space of time, so much so that I have agreed to produce teaching materials for Microsoft on using TouchDevelop for games development and programming. The materials will cover basic programming concepts and how to use TouchDevelop to create classic arcade games like Pong, Breakout, Space Invaders etc.

A final thank you goes out to Stuart Ball for inviting me down to the Appathon and to Microsoft for paying my flights and accommodation for the event. Also much say thanks to my Head of Section Bill Gallacher, Head of Department Anita Osborne and my Principal Audrey Cumberford for giving me the week off from my teaching duties at Reid Kerr College to attend these events.

It has been an inspiring and eventful week and something I have learned a lot from and with TouchDevelop I am taking back a great new tool to Scotland that I will hopefully be teaching to college and high school students in the coming year.

Error: Twitter did not respond. Please wait a few minutes and refresh this page.